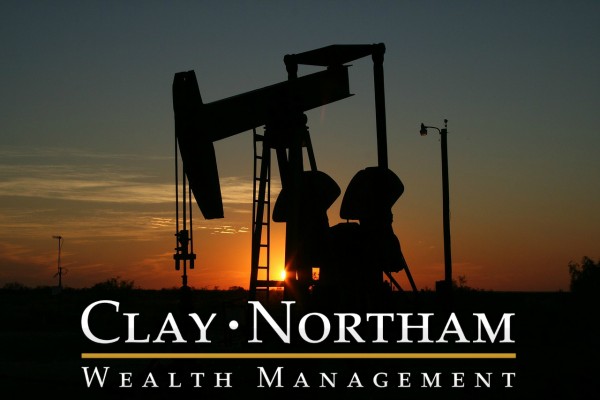 In April 2015 the Dallas Fed’s Economic Letter carried this front-page headline: “Plunging Oil Prices: A Boost for the U.S. Economy.” But the headline ended with this down note: “A Jolt for Texas.” The newsletter went on to say that while eight energy-dependent state economies might take a hit, lower oil prices represented a net positive for the U.S. as a whole.

If there’s a boost from the crash of crude oil prices, though, one of three things must be true: it was short-lived, it was overwhelmed by other negatives, or it’s yet to come. The price of crude oil plunged 66% percent from June 2014 to the end of last year, and GDP growth has declined in five the last six quarters. In January, the Commerce Department reported that the US economy grew by a mere 1.0% on an annualized basis in the fourth quarter last year, compared 2.5% for all of 2014 and 1.8% for all of last year. 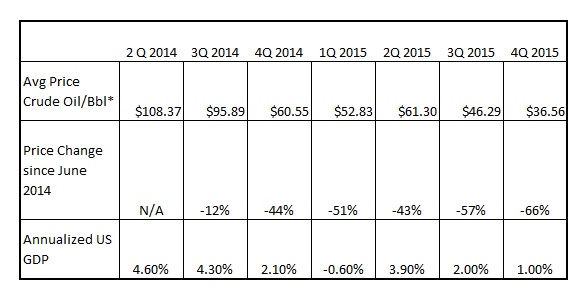 A big drop in crude oil prices is supposed to be a big boost to economy because it reduces the price of gasoline and heating oil. Businesses and consumer alike spend less on those commodities, and the cost of shipping everything, from furniture to food, goes down. The result is almost everybody has more to spend and, normally, spends it, just like they usually do with a tax cut.

So what’s different this time? Economists have come up with some theories:

• Consumer spending represents 70% of the US economy, and US consumers, wary about the economy since the Great Recession, are using their extra free cash to increase their savings and paying down debt more than they’re spending it. The US savings rate as of the end of January 2016 reached 5.2% of disposable income, compared to 4.3% in November 2013 4.8% in June 2014, when oil prices last peaked.

• With the rest of their extra cash, consumers are buying and using more gasoline instead of other goods and services. In its study of 2015 credit card spending, the JPMorgan Chase Institute said that US consumers spent at the pump much of the $120 billion they saved on gas prices.

• The energy sector of the US economy is hurting, with hundreds of oil patch companies going bankrupt, production being at least temporarily shut down, employees being laid off, and its capital spending being slashed. That’s sent negative ripples throughout the states that benefitted so much from US energy boom since 2009, particularly Texas, Oklahoma and North Dakota.

• The correction that the S&P 500 officially entered on January 15 this year reflects fears that the global economy is slowing. China has been the world’s growth engine for the last 15 years or so, but its growth rate has declined by more than half from its peak, to around 6.5%, officially, and possibly lower. Many see China’s slowdown as largely responsible for the decline in global oil prices, along with prices of many other key manufacturing commodities. The plunge has severely hurt countries that depend on oil exports, like Russia Venezuela, Mexico and Saudi Arabia, and have either already or are about to sink into recession. Another question mark is whether some large money center banks – the vortex of the last financial crisis – will suffer from a raft of oil loan defaults and lending will dry up for all. All that uncertainty weighs on thoughts that the US economy might not be strong enough to counter these forces and avoid being dragged down into recession itself.

Nevertheless, there are many economists who think these concerns are overblown, and that on balance, that lower oil prices will still be a net benefit to the U.S. “There are many more positives to lower oil prices than negatives,” said University of San Diego economist Alan Gin. Certainly, there some signs Gin may be right.

For one thing, they cite the fact that the oil and gas industry comprises less than 5% of the economy, and its pain will be more than made up by gains in the rest of it. Some also believe there’s only been a lag between the money the price decline has put into consumers’ hands and their willingness to spend. U.S. unemployment recently dipped below 5%, and, according to the U.S. Commerce Department, consumer spending rebounded in January, up 0.6 percent for the month after shrinking 0.3% in December lending some credence to the consumer lag theory. And as of March 7, the S&P 500 had clawed back more than half the 14% value it lost in the recent downturn, another sign that investors see more light ahead.

Finally, some see signs that the price of crude oil has bottomed out: after reaching a low of $26.19 in January, the average price of a barrel of crude rebounded to $36.42. It’s too early to tell, but a bottoming of oil prices may generate the optimism consumers and business needs to start spending again, and give the US economy the usual oil-price boost.