Why Investors Should Look Past 2017’s Massive Hurricane Damage 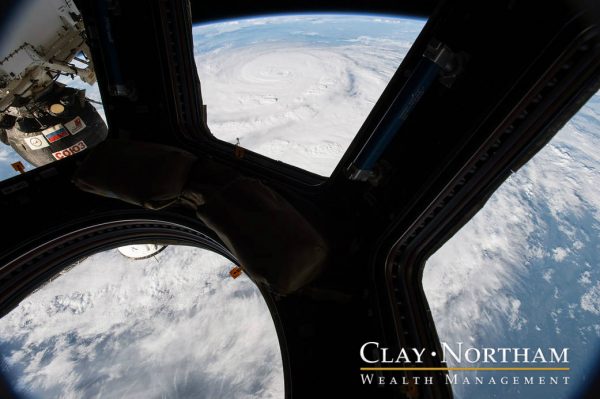 Hurricane Harvey seen through the cupola of the International Space Station.

You’d be excused if you are concerned that the record-setting hurricanes – particularly Hurricanes Harvey and Irma – that hit the United States in August and September 2017 were going to wreak havoc with the economy and stock market for some time to come.

After all, 2017 was the first time that two major Category 4 hurricanes made landfall here in the same season. Each was huge, with Harvey – described as a “1,000-year” storm — dumping more than 50 inches of rain around Houston, and Irma – at 400 miles wide – knocking out power for most of Florida and going on to inundate four more Southeastern states. Surely, they imposed massive costs:

• Flooding caused 20 Houston-area refineries, some of the biggest in the nation, to be shut down entirely or in part. This sent the average price of gasoline up nearly 12 percent to $2.69 a gallon in the biggest hike since Hurricane Katrina hit the Gulf Coast in 2005.

• The U.S. Department of Labor reported that jobless claims spiked in the wake of Harvey by some 62,000 to 298,000. The largest increase in initial claims since April 18, 2015, and a slight bump up in unemployment.

• Total losses, including damages to home and businesses, are estimated by some at $290 billion. This is equal to 1.5% of U.S. GDP, a daunting figure considering the economy grew only by that much in 2016.

But while that may sound like a prescription for economic and stock market catastrophe, history demonstrates that it pays for investors to remain calm, because the negative repercussions are typically short-lived and shallow. (That is, of course, unless you’re one of those who were directly in the hurricanes’ path.)

The table below shows what happened to the U.S. economy, as measured by quarterly changes in gross domestic product, in the aftermath of 10 of the strongest and most costly hurricanes to hit the country since 1950. Only three – Donna in 1960, Camille and Ike — were associated with negative growth that very quarter (note that Ike occurred in the midst of the worst decline since the 1930s), and just three — Hazel, Carla and Andrew – were followed by slower, but still positive growth. More significantly, however, the effects were small.

How to explain that? A few things: insurance (both private and federal), federal disaster relief and some job creation. So, while the storms have a short-term effect in shutting down businesses and reducing economic activity in some industries and places, the financial and fiscal response has a meaningful, countervailing stimulative effect.

With estimated damages totaling more than twice Katrina’s, it remains to be seen what effect Harvey and Irma will have on the economy, but it seems reasonable to expect roughly similar consequences – short and shallow. At least, that’s the consensus view among economists and investment strategists, like Gus Faucher, chief economist at PNC Financial Services Group, and Jim Baird, partner and chief investment officer at Plante Moran Financial Advisers.

“U.S. economic growth may briefly slow in the third quarter,” said Faucher in a note to clients, “but [it] should bounce back later this year and into 2018.”

Plante said: “The near-term economic impact of what increasingly appears to be two severe natural disasters in close proximity to one another will be a clear negative, and disruptive to the regional economies in the impacted areas. Having said that, the national economy appears to remain on track.”

And what about the stock market? Again, the broad market appears to have shrugged off Harvey and Irma. The Dow gave up 234 points on September 5, but that was just 1.1% of its value, and gained all of back and more by September 11. The Standard & Poor’s 500 followed a similar, slightly less volatile pattern.

That’s not to say there haven’t been losers. As is often the case with big natural disasters, hardest hit were property and casualty insurers. The S&P index for that industry fell more than 54 points, or 10 percent from its 2017 high of 538.62, which it reached on August 9, to 483.80 by September 7, and was still off nearly 5 percent by the September 13 close.

Meanwhile, cruise line giants Royal Caribbean (NYSE: RCL) and Carnival (NYSE: CCL) – some of whose Caribbean destinations have been devastated — suffered just half of property and casualty insurers’ price losses, and as of this writing have made virtually all of the losses back.

On the plus side, select building supply stocks have put in sharp gains since mid-August, with USG Group (NYSE: USG) up more than 20 percent and Eagle Materials (NYSE: EXP) up nearly 14 percent. Home improvement retailers like Home Depot (NYSE: HD) and Lowe’s (NYSE: LOW) have also done well, both having risen some 10 percent after August 31, and appear to be holding those gains, at least for now.

Our general position is to avoid overreacting to any financial headline news from the recent storms. In our view, not only should portfolios be based on fundamentals but there is little data that suggests hurricanes have a negative economic impact. Better to look past the storms and steer a steady course.