Why You Should Consider Foreign Stocks 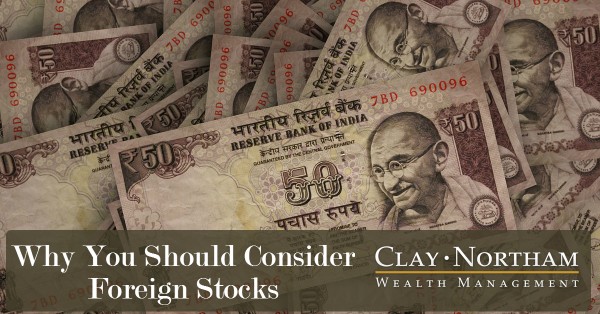 Should you be invested in foreign stocks? Some financial advisors think everyone should have at least some exposure to overseas equities, despite the extra currency risk and potentially higher volatility. What’s more, recent headlines are enough to give any investor pause: continued chaos in Greece, slower growth in Western Europe, Brazil and Russia on the verge of recession, and the recent crash in China’s Shanghai Composite stock index.

In spite of all that, there some good reasons to invest in foreign stocks, particularly now.

5 Reasons to Invest in Foreign Stocks

1. Most of the opportunity is overseas. The U.S. now accounts for only around 40% of the world’s stock market capitalization, and 22% of world economic output. Not coincidentally, many of the world’s most successful companies are based in foreign countries, stocks that could stand shoulder to shoulder with the bluest of America’s blue chip and fit nicely in most investors’ portfolios.

For example, in the Dow Jones index of 50 “global titans” of business, 21 are based overseas, names like BP, GlaxoSmithKline, HSBC in the United Kingdom; Siemens and BASF in Germany; Total and Sanofi-Aventis in France; Toyota and Mitsubishi UFC Financial Group in Japan; South Korea’s Samsung Electronics and Australian’s mining giant, BHP Billiton.

2. Economic growth has been faster overseas and is projected to continue that way for years to come. The world’s economy, less the United States, grew nearly twice as fast in the first decade of this century as it did here (3.23% per year versus 1.66%). Meanwhile, China’s growth has ranged from 7.4% to 10.5% over the last 40-some years, versus America’s 1.7% to 3.5%; and India’s economy has not been far behind China’s, at average annual rates between 3.0% and 7.5% over the same period. An economist for the Economic Research Service of the U.S. Department of Agriculture forecasts that in this decade, U.S. growth will average 2.5% to the 3.1% for the rest of the world, 7.3% for China and 6.5% in India.

3. Emerging market stocks outperformed U.S. stocks over the past 15 years, and may well continue to do so. Given the comparative economic growth rates we just discussed, this should be no surprise. The MSCI Emerging Markets Index, which tracks the stock markets in 23 lesser-developed countries (including China, India, Brazil, Russia and South Africa) has delivered average annualized returns of 7.4% over the past 15 compared to the S&P 500’s 4.3%.

4. Foreign stocks are starting to outperform those in the U.S. In contrast to the emerging markets, foreign stocks based in the developed industrialized countries have been lagging the S&P 500 for the past 20 years. The 21-country MSCI EAFE (Europe, Australasia and the Far East) returned an average of just 5.5% a year over the past 20 years compared to the S&P 500’s 9.4%, trailed U.S. for the last 5-, 10- and 15-year periods. It may be precisely for that reason that those same markets are poised to outperform the U.S. large-cap index, as foreign stocks sport lower valuations than U.S. stocks. For the first half of 2015, that’s been the case. While the S&P 500 delivered just 1.1% from January 1 through June 30 of this year, the MSCI Emerging Markets Index returned 3.0% and the EAFE Index 5.5%.

5. You may enjoy diversification benefits. Foreign markets don’t move in lock-step with the U.S. stock market, which means when the U.S. market is weak some markets somewhere are stronger. By adding foreign-market stocks, therefore, you may actually be able to reduce fluctuations in your portfolio performance and raise you returns over the long haul.

Today, there are more ways than ever to invest in overseas stocks. Hundreds of foreign companies trade on U.S. exchanges in the form of American Depository Receipts, and there are scores of exchange-traded funds in a great variety of flavors: you can buy EAFE and Emerging Market index funds, country funds, large cap and small cap foreign stocks, sector funds and style funds, and funds hedged for currency risk as well as unhedged.